What a game we have on our hands here. A huge Premier League clash that will play a pivotal part in the title race. A win for Liverpool would see them move 9 points clear of their title rivals after only 12 games. A win for Man City will close the gap to only 3 points and bring back horrible memories to the Liverpool fans of last seasons downfall. Liverpool are unbeaten in the last 23 games, which doesn't bode well when you consider that Man City have only won once in their last 28 visits to Anfield. Jurgen Klopp also boasts the upper hand over Pep Guardiola coming out on top in 8 of their 17 games where they have faced each other.

Whilst Liverpool lead the title race, City still boast a 73% win record this season despite losses to Norwich & Wolves. Guardiola's teams always perform well in big games so Liverpool will not underestimate City despite them boasting an unbeaten home record for over 900 days in the Premier League. Liverpool have only kept a clean sheet 3 times in their 18 games this season. Man City have scored in every league away game since they failed to do so at Stamford Bridge 11 months ago, therefore statistically speaking, both teams to score seems a pretty safe bet. Last sesons fixture between these sides did however finish goaless. 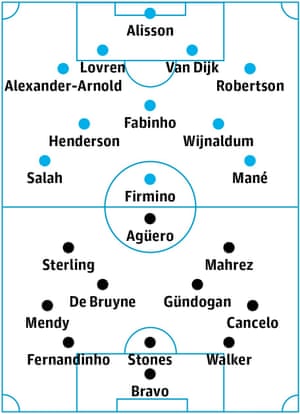 There is not much between these sides on paper. City carry a lot of injuries and Ederson's injury could have a huge impact on City's ability to keep possesion in their half and play out. Both teams are in great form heading into this fixture and both average over 2 goals a game. Therefore both teams to score seems a safe bet to us. We cannot seperate the sides and we feel that both managers would take a draw before a ball has been kicked. Therefore we are going with a 1-1 correct score prediction.

New customers only. 18+, BeGambleAware.org. Minimum deposit £10. UK customers only. Place a £10+ bet on football of odds 1/1 (2.00) or greater to receive your 4x£10 in football free bets. Free bets will expire 7 days after your qualifying bet is settled. £10 Casino bonus will be credited the next working day after you have deposited. Casino bonus must be wagered at least 35x before any withdrawals can take place.