Everton hosted Tottenham Sunday afternoon in a fiery encounter that lead to one of the worst injuries seen in the modern game. Everton's Andre Gomes went down from contact from Tottenham's Son however the tackle was not malicious and it seems momentum casued the injury rather than the challenge which seen Son sent off.

Tottenham took the lead just after the hour mark after fantastic composure was shown by the under fire Dele Alli. Alli celebrated by showing a hush action to the camera, more than likely in response to the pundits criticism the week prior where Gary Neville heavily critisiced the young Englishman for not having enough hunger. The phrase "wake up call" was used by the pundits and Alli cleverly reacted to this by imitating a baby falling asleep infront of the cameras.

However this has not been mentioned by the media today as what happened after to Andre Gomes was horrific and the main talk of the game. Gomes went down from the challenge and got sandwiched between Son and Aurier, it is unclear what caused the injury but it looks as though the momentum and the way he fell casued the fracture and dislocation. 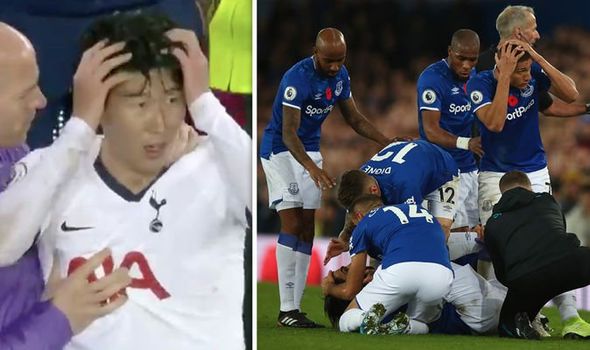 Gomes was seen to be in agony and this casued huge visible upset to all the players and fans behind the incident, but none more so than to Tottenham's Son that looked to feel responsible for the challenge and was seen in floods of tears leaving the stadium. Everton's Seamus Coleman who has recovered from a similar injury followed Son into the away changing rooms and comforted to Tottenham and South Korean star.

There was a late equaliser for Everton in injury time but the game finished 1-1.